It has been reported that New York City FC striker David Villa is being linked with a return to Barcelona. 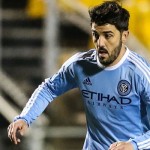 NYCFC have missed out on the MLS playoffs and Villa could return to Spain in January on-loan.

Barca chief Robert Fernandez is in the market for a new striker signing, with a ‘Henrik Larsson-type’ his preferred choice.

Villa fits the mould and told Levante TV: “Now they are calling me from all sides, from when we mathematically couldn’t be in the play-offs, they have called me although it doesn’t mean that I will back on loan, hypothetically.”

He could compete in Spain until March before returning to the United States.