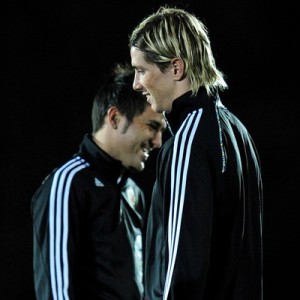 Barcelona striker David Villa revealed that he was sure that Spain teammate Fernando Torres would be joining Chelsea this summer.

The Liverpool ace now appears to be staying at Anfield.

The Barcelona striker told the Daily Star Sunday : “I am actually a little surprised. It looks like Nando is staying,”.

“After I spoke with him at the World Cup I thought he would sign for Chelsea. I think it must only be that Chelsea did not meet Liverpool’s valuation. Because, if they had, I am sure he would have made the move.”

He added: “This is Liverpool’s last chance to keep him. They have to prove they are capable of challenging on all fronts this season, otherwise he will be gone.

“If Liverpool fail to win anything I am sure he will be at Chelsea next summer.”