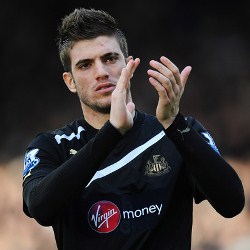 Davide Santon has revealed that AS Roma were after his services last summer.

The 21-year old departed Inter Milan for Newcastle in August but suggests that he may have made his home in his country’s capital if Roma were successful in their pursuit.

“There was talk about it, but in the end nothing concrete happened. “

Newcastle United On The Verge Of Signing Mathieu Debuchy

Roma Defender Cicinho Reveals He Is Happy At Europe