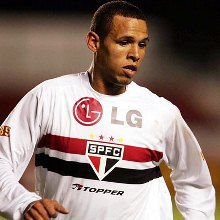 According to tuttomercatoweb.com, Brazilian striker Luis Fabiano is attracting plenty of interest from DC United.

It is said that the 32-year old Sao Paulo star could again be on his way out at Estadio do Morumbi after a second successful spell and it is believed that DC officials will soon be in Brazil to open negotiations.

DC head coach Ben Olsen has already said he wants to target a ‘big-name’ forward and Fabiano’s scoring exploits throughout his career will certainly be a massive coup for the Washington club, however, he is likely to cost around €7million.

Fabiano kicked off his career with Ponte Preta in 1998 before his 2000 move to French club Rennes. Since then he has scored a plethora of goals for current club Sao Paulo, Portuguese outfit FC Porto and Spanish club Sevilla.

He has represented Brazil on 44 occasions, scoring 28 goals, and was a part of the Sevilla side which claimed the back-to-back UEFA Cups in 2006 (scoring against Middlesbrough) and 2007.