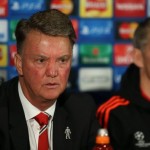 De Boer is a fan of Van Gaal, but says there’s areas in his approach he can improve.

He told Omnisport: “He always tries to make a battle with the media and its something I would not do.

“Sometimes you have to let things rest and try not to make things out of nothing.

“He does not like anyone who is against him and then he tries to bring down those words. He wants people to be honest.”

De Boer added: “The only thing I can do is make my players better and I cannot control what outsiders say. Therefore, I sometimes think: ‘let it go’.

“But Van Gaal is always full on and that’s entertaining and very funny.”