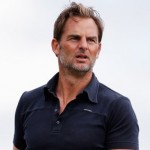 United’s senior players have complained to the manager about the lack of variety in training.

De Boer told talkSPORT: “At the end everybody believed in his way of thinking and everybody was getting the same ideas. I think that’s the transition he is in now I guess.

“I think it [criticism] is unfair. He has his own philosophy and ideas and he’s very difficult to push him aside. That’s also his strength because as a manager you need your own philosophy and in the end he has strong belief of where he will end up with his team and that’s a strong point for him.”