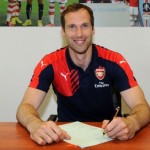 The French international defender believes that the signing of former Chelsea goalkeeper Cech could be the difference for the Gunners in their title challenge next season.

The Czech Republic international won the league title four times at Stamford Bridge and Debuchy believes he can recreate his success with Arsenal.

Debuchy told Arsenal Player: “Petr is a very good keeper with massive experience. He has a lot of quality and is a complete goalkeeper.