It has been reported that Manchester United captain Wayne Rooney says defeat to Swansea City was “hard to take”. 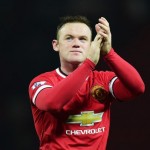 “Of course, it is hard to take,” Rooney told MUTV in South Wales. “Certainly, in the second half, I thought we dominated up until they scored and I thought we got a great goal to go 1-0 up. I was really disappointed in the way we conceded, coming from a throw-in so soon after we scored.

“We went in at half-time knowing that we could play. In the second half they were struggling to get out but then they hit us with a sucker punch, a shot from 30 yards and a deflected goal. These things happen but it was a disappointing day for us.

“If we could have kept hold of the lead until half-time, Swansea would have had to have tried to come out more leaving even more space for us. As I said before, I thought we dominated but maybe didn’t test the keeper enough up until they scored, that’s disappointing given the play we had.

“It was one-way traffic and it felt like that on the pitch, it felt like a matter of time. We were putting them under pressure but they did defend the box well, putting bodies in front of the ball, but this is a blow for us, coming away from today with no points having played like that.”