Reports are out claiming that Arsenal manager Arsene Wenger has not ruled out his side pushing for knockout stage qualification in the Champions League. 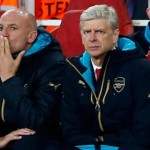 The Gunners were surprisingly beaten 3-2 at home by Olympiakos on Tuesday night to kick off their Group F camping with successive defeats, leaving them reeling at the foot of the table.

With a home clash with German giants Bayern Munich next on the agenda, it gets no easier for Arsenal, but Wenger was remaining defiant in the face of adversity in his post-match press conference.

“It puts us in a bad position but we are still in it,” he said.

“We have to think we can deal with (Dinamo) Zagreb and Olympiakos and we need a result in our next game away from home against Bayern Munich.”

After losing to Zagreb and Olympiakos, the North Londoners are without a point at the bottom of the group, three points behind both the Croatian and Greek champions, and six in arrears of Bundesliga winners Bayern.

Man Utd Willing To Release Victor Valdes On One Condition…