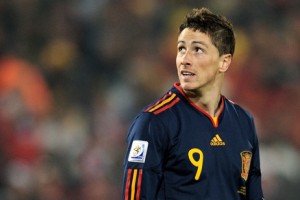 Despite numerous calls for Spain coach Vicente Del Bosque to drop out-of-form striker Fernando Torres and to be replaced with Fernando Llorente for Saturday’s quarter-final with Paraguay, it appears that the coach is set to keep faith on the Liverpool striker.

Media polls of fans in Spain have shown backing for a switch in attack but Del Bosque is still backing Torres to come good.

Del Bosque said : “It’s impossible to avoid such a debate at a tournament like this because everyone has an opinion and it’s good that they are expressed,”.

“Our forward at the moment is Fernando (Torres). He has played a part in all four matches, quite a few minutes, and he’ll play more.

“We have full confidence in him and we also know that Fernando Llorente can bring a lot to the team,” he added.