Reports have emerged claiming that Dele Alli is delighted with his new contract at Tottenham. 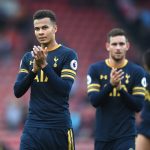 “I remember that game at Sunderland, I didn’t expect to play as quickly as I did and make an impact in the team,” Alli told the Spurs website. “It’s happened so quickly, starting at Tottenham, playing for England… it’s been a crazy year for me and there are so many people I have to thank.

“I’m happy to be at this Club and I can’t thank the manager and all the staff enough for everything they’ve done for me, and the fans, they’ve been right behind me since I signed. Hopefully there are a lot of good times to come.

“It’s a bit surreal but I’m the same kid as I always have been, nothing has changed for me off the pitch, I’m still the same person and thankfully, like I said before, I’ve got great support around me.

“The hard work isn’t going to stop here. I have to keep working hard and keep fighting for my place in this team.”