Demba Ba was again the hero as Chelsea defeated Swansea City 1-0 at the Liberty Stadium on Sunday. 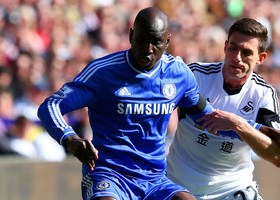 The Senegal international scored the only goal of the game as the Blues managed to overcome a ten-man Swans outfit to remain two points behind league leaders Liverpool.

It was the second goal in a week for Ba after he scored in the 2-0 Champions League win over Paris Saint-Germain on Wednesday hich saw the west London club through to the semi-finals and he was in a buoyant mood after his south Wales winner.

“It’s not been a bad week. I’m happy for the team and for me,” he told Sky Sports.

“I knew I would get the opportunity to come in and do something.

“It is going to be a great end to the season for us and the fans.”

This season, Ba has netted four goals in 16 Premier League outings, including three starts, for a total of seven in all competitions. Ancelotti : Essien Will Not Play This Season