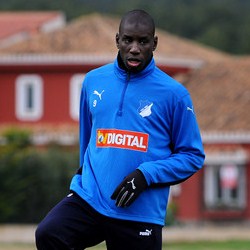 Hoffenheim striker Demba Ba has reportedly made it clear to the club management that he wants a move to Premier League side West Ham United.

The 25 year old French-born Senegalese footballer went on strike yesterday in an effort to force through a £6million move to Upton Park.

Hoffenheim managing director Ernst Tanner told the Daily Mail: “Yes, it’s true he has refused to go to La Manga, even though we demanded he catch a flight and join up with his teammates.

“I have told him he will have to face the consequences. It could be a fine or we could throw him out altogether and make him see out his contract without playing.” West Ham Target Mikel Arteta To Be Released By Arsenal