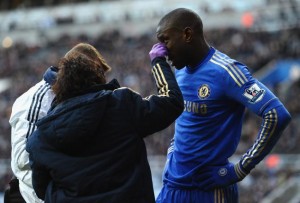 Chelsea striker Demba Ba was forced out of Saturday’s English Premier League clash with Newcastle United after taking a boot to the face in the first half at St. James’ Park, according to Chelsea’s official Twitter account:

He took a whack in the face from Coloccini and is receiving treatment. #CFC

John Obi Mikel Ready To Wait For His Chance At Chelsea Pellegrini Blasts Mourinho : Everyone Can Play The Way They Want!