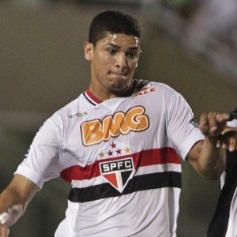 Reports have surfaced that Denilson could be on his way back to Arsenal as he endures a difficult loan at Sao Paulo.

The Daily Mail has reported that the Brazilian international midfielder has suffered a rough ride at his new club, sparked by two red cards in his first three appearances, the second which was for a show of dissent.

That caused rifts between the ambitious 23-year-old and the fans, a divide which widened this week when Denilson branded some fans who were protesting against boss Adilson Batista ‘very, very annoying’.

Supporters are now calling for the man Denilson was defending, Batista, to never allow the former Brazilian youth team captain to play for the team again.