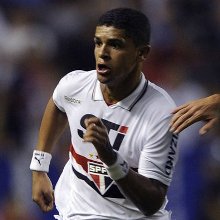 Denilson has admitted that he is unsure if he has a future at parent club Arsenal.

The 24-year old Brazilian midfielder is in his second year on loan with hometown club Sao Paulo, where he will remain until the summer, but does not know if he will again be an Arsenal player.

Denilson told Globo Esporte : “I will see out my contract (with Sao Paulo ) which ends on June 30, 2013. But I don’t know what will happen after that,”.

“I hope my situation is solved quickly so I have nothing to worry about and so I can remain calm for the rest of the season.”

Denilson, who joined the Gunners in 2006, has made 81 appearances for Sao Paulo since returning to the Estadio do Morumbi in the summer of 2011.

Arsenal Youngster Chuks Aneke Ready To Move Out On Loan Arsene Wenger Wants Ramsey To Focus On Getting His “Priorities Right”