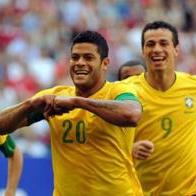 Brazil’s Hulk scored twice and created another goal to lead his team to a 3-1 victory over Denmark in a friendly match in Hamburg on Saturday, with the error-prone Scandinavians in need of improvement ahead of next month’s Euro 2012.

With their first Group B match just two weeks away on June 9 against Netherlands, Denmark coach Morten Olsen will be no doubt reviewing their defensive operation after his players conceded by gifted the ball to Brazil three times in the first half.

The touring South Americans will also play three friendlies in the United States in the coming weeks as coach Mano Menezes prepares their assault on the Olympic gold medal – the only trophy missing from their vast collection.