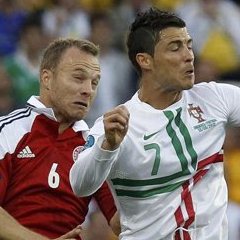 Silvestre Varela kept Portugal’s Euro 2012 hopes alive with a late goal in a 3-2 win over Group B rivals Denmark in Lviv.

Sunderland forward Nicklas Bendtner scored twice (41,80) as Morten Olsen’s side recovered from falling 2-0 behind to Pepe’s headed opener on 24 minutes and a Helder Postiga finish from inside the Danish area on 36 minutes.

Despite Real Madrid forward Cristiano Ronaldo missing a couple of obvious chances, substitute Varela sealed the three points for Portugal – their first win of the year after a series of indifferent results in friendies – when he walloped a blistering shot into the corner of the net at the second attempt from Fabio Coentrao’s delightful pass.

Portugal were worth their win on the night. They join Denmark and Germany on three points with Germany due to face the Netherlands later on Wednesday.