Reports are out claiming that Denmark coach Morten Olsen insists that Nicklas Bendtner must leave Arsenal to rescue his career.

The 26 year old comes off contract in June. 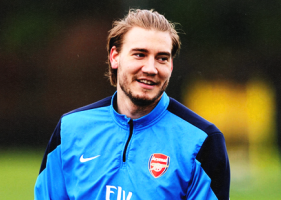 “I don’t want him to go away from Arsenal, him playing there is fantastic, but he has to,” said the Denmark manager.

“But now he’s in his middle-20s and he needs regular football now.

“We saw in the European Championship in 2012 when he is physically ready he is a very good player, but he has to play.

“I think if he plays at the right place, and he’s physically 100 per cent he can play in many places. Now he is coming to Arsenal when he was 16, but he has to decide that maybe with eight years to go.

“When he’s 35 I hope he will be able to sit and say the last eight years were the best of my football life.

“That [confidence] has not always helped him, but I think it’s a learning process, somebody takes a year more or two than others. You need confidence to survive in top football, but you have to take it step by step.

“We know what he can do when he’s in top condition.”