Reports are out claiming that the agent of Belgian starlet Dennis Praet believes his client would be well-suited to a club like Arsenal. 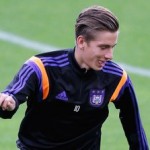 The 20-year old Anderlecht attacking midfielder is being linked with the Gunners as well as Liverpool, Manchester United, Newcastle United, Valencia and Atletico Madrid.

Praet, who comes out of contract at the end of the season, is being touted as one of the next big things in Europe and his representative Jacques Lichtenstein feels he can soon step up to one of the bigger competitions in the region.

“What could he learn from another season in Belgium after several campaigns at European level and having contributed to three consecutive league titles?,” pondered the agent to Sport Voetbal magazine.

“Clubs like Valencia, Liverpool, Arsenal and Atletico Madrid are all interesting but Dynamo Kiev are not.

“Dennis should go to a team where they play good football.

“He is not far from the level of a club like Arsenal, if they could give him a year’s adjustment period.

“But I will never push a player in a direction of a transfer. You can make a career of twenty years without a having a long term vision.” Wojciech Szczesny Expected To Be Sold By Arsenal