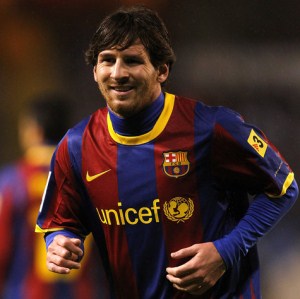 A first-half finish from David Villa set them on their way, while Messi’s free-kick and later strikes from Andres Iniesta and Pedro inside a minute made it a rout.

Villa finished the first on 26 minutes, sneaking the ball under Daniel Aranzubia and inside the near post following a Messi pass.

It was the Spain star’s 14th goal of the season and 11th in 14 matches against Depor.

However home striker Adrian should have given his side the lead five minutes before that when the ball dropped to him a few yards out and he failed to get a boot on it.

There was little in the way of incision from the champions, who dominated the football as always despite resting midfielders Xavi and Sergio Busquets and right-back Dani Alves, in the first period.


Mourinho : Kaka Will Play Against Villarreal