It has been reported that Derby County have snapped up Stoke City goalkeeper Jack Butland on a month’s loan. 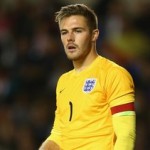 Rams head coach Steve McClaren has made a move for Butland following an injury to first-choice keeper Lee Grant, who will be out for between four and six weeks after sustaining an ankle problem during Saturday’s 3-0 win at Reading.

The 21-year-old is set to make his debut for Derby in their Sky Bet Championship fixture against Blackpool at Bloomfield Road on Tuesday night.

“We’re extremely pleased to welcome Jack Butland to Derby County and I would like to extend our thanks to Stoke City for agreeing to let him join us on loan,” McClaren told his club’s official website.

“Jack is a promising young goalkeeper and after Lee Grant picked up an injury on Saturday, as a management team, we quickly set about identifying someone to come into the group.

“We know a lot about Jack and he is someone who Eric Steele (Derby’s goalkeeping coach) rates very highly.”

Michael Owen Eager To Get Started With Stoke City