Reports are out claiming that Paul Merson believes that Arsene Wenger could find himself under pressure if Arsenal suffer a defeat in the North London derby this weekend. 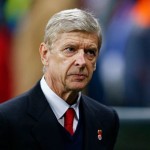 Arsenal’s fine form was brought to a halt following an embarrassing 5-1 defeat at the hands of Bayern Munich in their midweek Champions League encounter.

Despite the defeat, it does not take away from the fact that Arsenal have enjoyed a solid season so far. However, former Arsenal star Paul Merson believes that manager Arsene Wenger will find himself under pressure if the Merson told Sky Sports: “This is a big game for Tottenham and a big game for Arsenal after the embarrassment against Bayern.

“When you consider the manner in which they lost in Munich, if Arsenal were to lose you could say Arsene Wenger would come under pressure again. Saying that, I do expect Arsenal to win, I’d be shocked if they didn’t.”