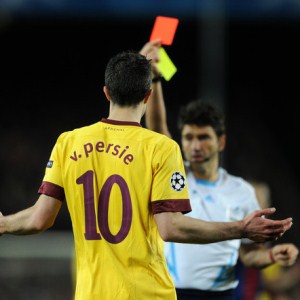 Arsenal striker Robin Van Persie was controversially sent off during their Champions League round of 16 clash against FC Barcelona at the Nou Camp.

The Dutch striker after the match branded the decision as a ‘total joke’ and even blasted the referee saying ‘the referee killed the game!’

Arsenal manager was equally vocal in his opinion and claimed that Arsenal could have won the match and progressed to the next stage if Van Persie was not shown the red card.

The French tactician confronted the Swiss official after the final whistle over the sending off and the angry exchange continued inside the tunnel.

Match referee Massimo Busacca showed Van Persie a second yellow card for shooting at goal just one second after he had blown the whistle for offside and the Arsenal striker claimed he had not heard it due to the noise of the 95,000-plus crowd.

The question now is was the referee correct in deciding to send off Robin van Persie? Did Van Persie deserve the red card? Vote now and let us know what you think.

You can also voice out your opinions in the comments section below. Cheers!