It has been reported that France coach Didier Deschamps has again defended leaving Manchester City midfielder Samir Nasri out of his World Cup squad. 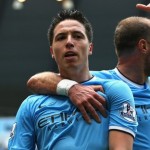 City officials, including Patrick Vieira, are angered by Deschamps’ decision

But the Les Bleus coach said: “I’ve watched his games. He performs at Manchester City on a different level than when he wears the shirt of France. As a coach I have to make important decisions.

“Sporting arguments are important, but not decisive.

“I do not regret my decision,” Deschamps goes further.

“Whether Nasri has disappointed me? Each player has a different character. I’m not going into events that have happened in the past. Since my appointment I have watched several players and on this basis made a decision.”