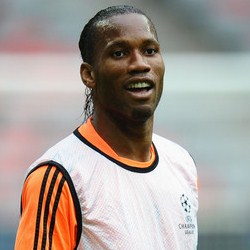 Didier Drogba has admitted that it was difficult to leave Chelsea.

The Ivory Coast international striker spent eight seasons with Chelsea after joining from Marseille and his final act for the club was to score the winning penalty in the shoot-out in last month’s UEFA Champions League final against Bayern Munich.

He added: “Chelsea were very good for me. I shared a special relationship with the club.

“It was a difficult decision to leave them.”