It has been reported that Chelsea are confident closing a deal for favourite son Didier Drogba. 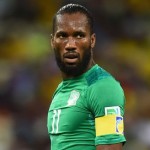 The Mirror claims that Blues boss Jose Mourinho is confident of luring the 36-year-old Ivorian back on a one-year deal, with the option of a coaching job beyond that.

It is said that Mourinho wants club legend Drogba’s inspirational qualities back in the dressing room having lost two other stalwarts, Ashley Cole and Frank Lampard.

The striking legend has several other offers on the table after the expiration of his contract with Turkish side Galatasaray and his representatives insisted on Sunday that no final decision has yet been made by the player.

But the appeal of a return to the scene of some of his greatest moments as a player will be hard to resist.