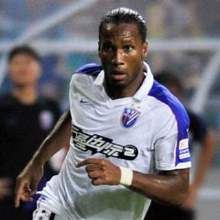 Didier Drogba has ruled out a return to the Premier League.

The former Chelsea hero has been frequently linked to English clubs, with a mooted two-month loan to Liverpool being just one of many rumours.

However the former Marseille striker insists he has no intention of cutting short his stay with Shanghai Shenhua.

The Ivory Coast international, who moved to the Chinese Super League in the summer, said: “I hope next season I can start again from the beginning with Shenhua.

“Because I joined relatively late, I didn’t prepare with the team early in the season, so our results were not very good.”

Drogba quit Chelsea for a reported £200,000-a-week payday in China and notched eight goals in 11 appearances for his new club.

The Chinese season begins in March and the striker is determined to help Shenhua improve on last term’s ninth-placed finish.