Reports are out claiming that Chelsea boss Jose Mourinho was pleased for matchwinner Diego Costa after victory over Norwich City. 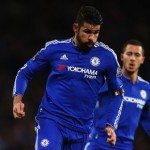 Costa admitted earlier this season to reporting for pre-season overweight and the striker, prolific last term in Chelsea’s title triumph, had scored just three times prior to the international break.

“In the first half he missed two chances. The second one, in the last minute, is really a big one. So it was important for him. Important for us, the result and the goal, but I think also for him.

“He’s working well, he’s a happy guy, he tries everything. He’s positive, so if I had to choose somebody to score the winning goal, I would go exactly with him.”

Costa’s fluency was not what it should be, says Mourinho, who had to remind his striker to return to position quickly moments prior to the goal.

“When you lose confidence, you lose this fluent game. Yes, he can do much better, but again, yes, one goal is very important,” Mourinho added.

“I was telling him that he was being caught offside a couple of times, also in the first half, because he was late to recover position.

“When the team tries to reach that, he needs to be in a position to attack that, not in an offside position.

“The goal was a little bit like that, because he was in a position that he could attack space and not in a space offside.”

Carlo Ancelotti : David Luiz Must Improve On His Focus!