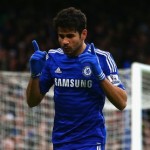 It has been reported that Chelsea striker Diego Costa has played down his goalscoring success this season.

Speaking to Chelsea’s official website, the former Atletico Madrid star said: “Of course it is nice to be the top scorer but when I came here my aim was to win the league.

“The most important thing is the club going well, like we did in the other leagues I played in, and it would be nice at the end of the season to see the team doing well as well as the individual.

“Fifteen goals is a good mark and I hope to improve it, but more important than my goals is the team is winning.”

Arsene Wenger : Arsenal Must Be Consistent!