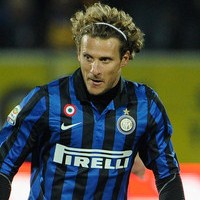 Former Manchester United striker Diego Forlan has been linked with a move to the Brazilian League.

The father of the Inter Milan striker has confirmed interest from Brazil.

It is said that there are several Brazilian clubs are chasing the Uruguay international forward.

“Diego would have no problems adapting to Brazilian football, but he has a contract until July 2013 with Inter and has always respected deals with his clubs.

“The Nerazzurri are making him play in a new position and, considering this moment in his career, it is difficult to adapt.”