It has been reported that Diego Maradona has become a Manchester United fan. 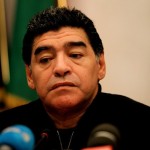 The World Cup winner was handed a red box with the Manchester United crest on it and appeared only too happy to receive his gift.

Maradona, 53, embraced his fellow United fan and posed for a picture.

Federico Macheda Determined To Prove Himself At QPR