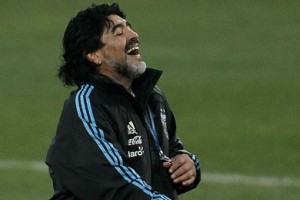 Sensational news are out and it has been reported that Argentina coach Diego Maradona has claimed that Germany are nervous and mocking midfielder Bastian Schweinsteiger in the process.

Schweinsteiger criticised Argentina earlier this week by questioning their conduct when Germany beat them on penalties in the 2006 World Cup at the same stage.

In an interview with Fox Sports on Thursday, Maradona was only too willing to stoke the flames. He turned directly to the camera and in an imitation German accent said: “What’s the matter Schweinsteiger? Are you nervoussh?”

Maradona went on to say: “It doesn’t worry me what he says about penalties and that we don’t know how to lose. It doesn’t interest us. A different game is played every match and this is going to be different because we are coming out to attack them and play in their faces. This is what has made them nervous.”

Martin Demichelis, who plays in Germany for Bayern Munich, added: “I have been in Germany for seven years. They know me and they know I won’t change. But it does seem they don’t have a lot of respect for us.

“I am not paying much attention to it, but maybe they should show us some respect.”

Gerrard : Roy Hodgson Is The Right Man For Liverpool