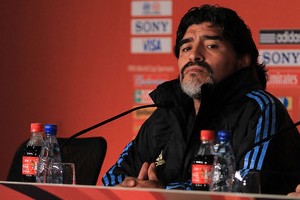 Interesting news are out and it has been reported that Diego Maradona will be offered a new four-year contract to stay on as Argentina coach.

The Argentinian Football Association announced that president Julio Grondona will meet with Maradona next week to offer him the chance to guide his nation to the Brazil 2014 World Cup.

This came after the AFA executive committee determined that Maradona remains the right man to command the national team after a respectable showing at the World Cup in South Africa.

It is said that Grondona intends to meet with Maradona no later than next Wednesday to discuss the contract extension.

Maradona on his part said after his side’s exit that he would consult his family and the Argentina players before deciding whether he intended to stay on.