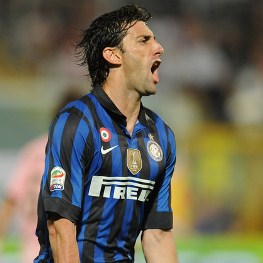 Despite their 4-3 defeat at Palermo, Inter Milan striker Diego Milito insists that the club is on the right track.

The Argentine international scored twice at the Stadio Barbera, but his side were beaten by a motivated Rosanero in Sicily.

“It’s not right to think of the Inter of two years ago,” the 32 year old striker, who was part of that treble-winning side, told RAI.

“Today we are a different team, with a new Coach who has other tactics in mind compared to those of the past and we have to be able to adapt to it.

“On a personal level it is always gratifying for a striker to score, but I can’t hide my disappointment at the result.

“Naturally we all want to win, but now it’s time to look to the future and try to improve.”