It has been reported that Inter Milan striker Diego Milito is keen on new contract talks. 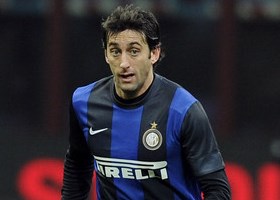 The 34-year-old Argentinean, who has been at Inter since 2009, claims that he has no problem in remaining at Inter beyond next summer.

“For me, there won’t be any problem in putting a signature and remaining for another year,” he told Sport Mediaset.

“I feel at home. But for the moment I don’t think what will happen in June. I live in the moment and the only thing that interests me is to come back playing.” Pavel Nedved : I Could Have Won The Champions League With Inter Milan