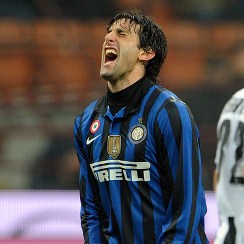 The Argentine striker takes the unfortunate ‘Golden Bin’ honour as the worst player of 2011.

The former Genoa man succeeds Adriano who won the 2010 honour while under-performing at Roma. The Brazilian also ‘succeeded’ in 2006 and 2007.

Juventus striker Amauri, who hasn’t played for the Old Lady this season, was runner-up for the second consecutive year.