It has been reported that Diego Ribas has left Atletico Madrid for Fenerbahce. 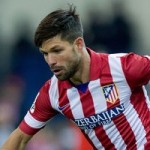 It is said that the Brazilian midfielder has signed a three-year deal with Fener after choosing to leave Atletico.

The 29 year old arrived in Madrid in January from Wolfsburg, but struggled for minutes and chose to move on this month.

Diego was also linked with a move to the Premier League with Arsenal.