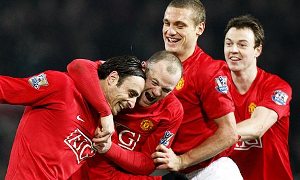 Bulgarian international striker Dimitar Berbatov has admitted he expects to do better for English champions Manchester United next season.

Although Berbatov has had his good moments and finding the net on 14 occasions, largely his debut campaign for the Old Trafford outfit has been written off as a disappointment.

In fact, failing to make the starting line-up for the Champions League final defeat to Barcelona in Rome led some to suggest Berbatov might be sold on, less than 12 months after his arrival.

Yet it seems Ferguson has certainly not lost faith in Berbatov’s silky skills and if anything, the 28-year-old is now an even more important figure for the Red Devils given Cristiano Ronaldo and Carlos Tevez have left the club.

It just increases the pressure a notch for the striker, not that the ultra laid-back Berbatov has ever given any indication of being affected by such trivialities.

However, he does concede the need for improvement and he expects it to come.