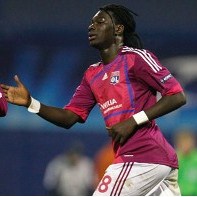 Bafetimbi Gomis struck four times as Lyon routed 10-man Dinamo Zagreb and completed a remarkable nine-goal swing to qualify for the last 16 of the Champions League ahead of Group D rivals Ajax.

With Ajax losing to group winners Real Madrid, the French side still had a mathematical chance of going through but were seven adrift on goal difference.

Real’s 3-0 win in Amsterdam did some of the work but a stunning six-goal showing in the second period against Dinamo was decisive.