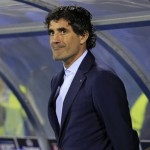 Reports are out claiming that Dinamo Zagreb boss Zoran Mamic is wary of Arsenal’s attacking threat ahead of the Wednesday’s Champions League encounter between the clubs.

Mamic believes the Gunners can attack from all directions and many players in the team are capable of scoring.

“I have watched Arsenal in many games,” he told Goal.com.

“I went to see them against Stoke this weekend and I got the impression they were playing in second or third gear, and should have won 10-0! It is frightening and fascinating how they play. I believe we will be better than Stoke.

“(Santi) Cazorla and (Mesut) Ozil are key Arsenal players, but the team is so strong that danger comes from everywhere.” Arsene Wenger In No Hurry To Open Arsenal Contract Talks