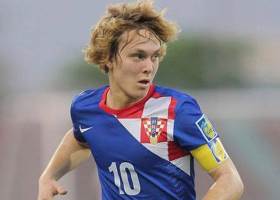 It has been reported that Dinamo Zagreb midfielder Alen Halilovic will be in Barcelona next week.

The 17 year old Croatian international has been confirmed as a Barca signing for next season, where he will initially play for the club’s B team.

Zoran Mamic, Dinamo’s sporting director, revealed: “Halilovic will pass the medical at Barcelona next week and then it will be official.” I Will Leave If Barcelona Don’t Want Me – Lionel Messi