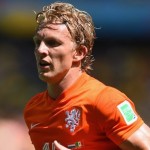 Fenerbahce veteran Kuyt played under Van Gaal in Brazil where the pair have been representing the Netherlands in the World Cup.

He said: “There was only one thing for this coach and he just wanted to win this cup. That is the type of coach he is, he just wants to win things.

“The spirit is part of everyone. Of course the coach is leading us. But team spirit is amazing.”