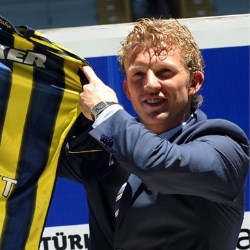 Dirk Kuyt has revealed that Arsenal captain Robin van Persie would like to play for Fenerbahce in the future.

Former Liverpool attacker Kuyt signed for Fener at the end of last season.

“Before I had signed, we spoke and he was full of praise for Fenerbahçe. He played in the Champions League twice against Fener and was impressed by the team and the supporters.

“Van Persie said one day he’d like to play for Fenerbahçe. For now that is not an issue, but maybe in the future,” revealed Kuyt.

Everton The Best Side Arsenal Faced This Season! – Mikel Arteta