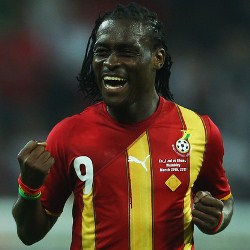 Reports are out claiming that Ukrainian club Dnipro have reportedly knocked back an offer from Fulham for Derek Boateng.

The 29-year old Ghanaian midfielder has attracted the interest of the Cottagers recently with Sky Sports suggesting that the West Londoners have made a bid.

However Dnipro, who purchased Boateng from Spanish club Getafe last summer, did not come to an agreement with Fulham for the former AIK, Beitar Jerusalem and FC Cologne man.

The versatile midfielder, who has also been a target for West Bromwich Albion in the past, is believed to be keen on a new challenge after spending a season in the Ukrainian Premier League.