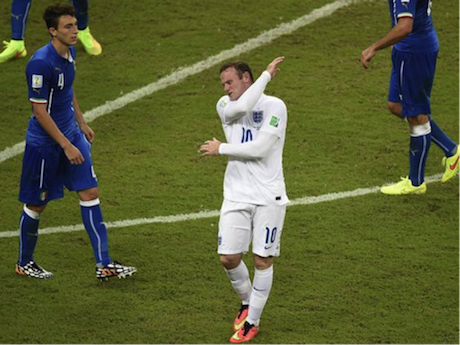 It can’t be argued that despite defeat in Manaus on Saturday, there’s an air of optimism amongst England fans. The Three Lions free-flowing, exciting, attacking football troubled the Azzuri throughout, and Hodgson’s bold move to start with four out-and-out attackers earned wide-spread praise across the nation.
However, the game wasn’t without its pitfalls, after all England lost, and questions are beginning to mount as to who should be walking out in Sao Paulo to face Uruguay.

And the man at the forefront of the debate is England’s number 10, Wayne Rooney. Despite his shirt number, the Manchester United forward was forced onto the left hand side on Saturday night, in favour of Raheem Sterling who played in the hole. Aside from a scintillating ball to set up Daniel Sturridge for the equaliser, Rooney did little of any note.

That’s not to say he played badly, but playing him out of position when there are players who can manage the flanks more effectively certainly poses a few questions.

It would be a brave decision for Roy to drop the side’s most talented player when the England Team News is announced, but with no World Cup goals to his name, and Sterling more than impressing behind the striker, he may have no choice.

However, whilst fans have been on his back, ex-pros have been quick to defend Rooney. Paul Scholes in particular, who criticised his former teammate only a few weeks ago, focussed more on the fact he had been played out of position. 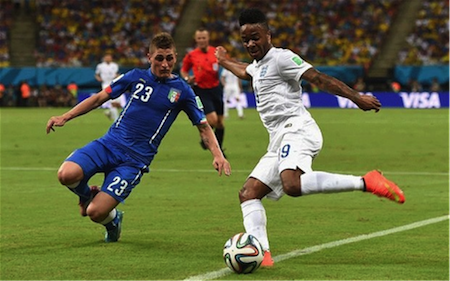 He wrote in his column, “The disappointing thing was not the way Wayne Rooney played but where he was played.

“I don’t blame Wayne one little bit but he was played in three different positions. He’s without a doubt England’s best goalscorer (his record in qualifying showed that: seven goals). But he was played on the left, played on the right, then in the centre. Where’s the confidence in Wayne to say: “You’re our main player. You’re the centre forward.” If he plays there, he scores goals.”

Either way, England need to be at their best against Uruguay, and if Hodgson won’t play Rooney in a more central role he may have to drop him altogether in favour of a more defensively minded player who can offer much needed cover for the full backs.

Both the England Left Back and Right Back were painfully exposed against Italy. Of course they have a great mentor in Gary Neville and he will certainly want Glen Johnson and Leighton Baines – who had his toughest game in an England shirt on Saturday – to be a lot tighter defensively if England are to qualify out of the group.

Johnson has been out of form for a number of weeks now, and could face the chop with Phil Jones perhaps being the most likely replacement to keep the likes of Luis Suarez and Edinson Cavani at bay.

But form isn’t the only thing on the mind of the England manager. After hearty, gut-busting performances from the entire team against Italy, his men were looking visibly tired. Sterling pulled up with cramp, whilst more notably captain Steven Gerrard looked like the muggy conditions had taken it out of him in the dying stages of the game.

Despite this, Hodgson does have a clean bill of health overall. Oxlade-Chamberlain is still recovering from the injury he sustained in the pre-tournament friendly against Ecuador but there’s certainly enough depth in the England squad to cause problems with or without Rooney