Petr Cech has joined Arsenal from Premier League rivals Chelsea on a long-term contract for an undisclosed fee, the North London club have announced. 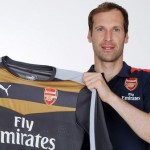 The goalkeeper position has been an issue for Arsenal over recent years with Wojciech Szczesny and David Ospina sharing the role during the last campaign.

“Petr Cech is a player that I have admired for a long time and I am very pleased that he has decided to join us,” said Arsenal manager Arsene Wenger.

“He has proven over many seasons that he is one of the outstanding keepers in the world and he will add great strength to our squad.”

“I have the same commitment to football, the same motivation and the same hunger for success as I had at the beginning of my career, and I love the challenges brought by the top quality players you face while playing in the Premier League.

“When Arsene Wenger spoke to me about his ambitions for this club, and how he saw me as part of this team, the decision was clear.”