Reports are out claiming that Theo Walcott has agreed terms over a new deal at Arsenal. 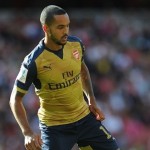 The 26 year­ old England international winger was set to enter the last year of his current deal, says the Sunday Mirror.

But after a summer of talks between the player and his representatives, negotiations ended successfully.

The deal will keep Walcott at the Emirates until 2019 and put his salary in the £100,000 a year bracket and make him one of the club’s highest earners.

Arsenal will officially confirm the new contract in the next two weeks – certainly before the start of the Premier League season when they play West Ham at home.