Manchester United midfielder Darren Fletcher believes the renowned character of the Red Devils will help the famous club swiftly return to the top of the Premier League. 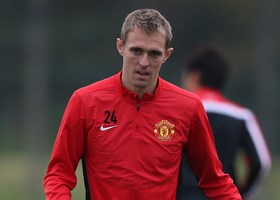 United’s woes have been widely reported this season after the reigning premiers fell to seventh on the table and failed in both the FA and League Cups.

It has been a tough beginning for manager David Moyes after he took the reins from Sir Alex Ferguson but midfielder Fletcher believes having the Champions League quarter-finals with Bayern Munich to look forward to and the resilience of the Red Devils will restore sanity at Old Trafford sooner than later.

The Scotland international told Sky Sports : “There’s always been difficult times and it’s a test of character I think. You’ve got to look around the dressing room and I see good characters,”.

“We’ve all got to dig together, the staff, the players, everyone. It’s a time for big characters, and big characters come through it. That remains to be seen whether we can, but I believe we can. I know we can.

“Our form’s been good in that, barring the away to Olympiakos game, so I’m excited for it. With that packed house at Old Trafford on a Champions League night – don’t write us off.”