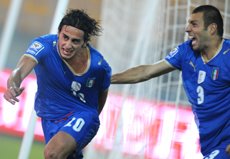 It has been revealed that Liverpool ans Italian international fullback Andrea Dossena is keen to see Roma midfielder Alberto Aquilani join him at Anfield.

Dossena told reporters that Alberto Aquilani is destined to improve even more and he could do so even more quickly under a great coach like Rafael Benitez.

He also added that a player like him can comfortably play for Liverpool or any other big club in the world. Dossena also said that Aquilani was sidelined due to physical problems last season and could not be at his best, but he has proved to be a great footballer.

The defender also went on to say that Aquilani will definitely do well in the Premier League, even though it is a more physical league than the Italian Serie A.

He also added that manager Benitez is very good at setting up the team and moving it around and that he has many solutions at his disposal and could employ Aquilani in different ways.